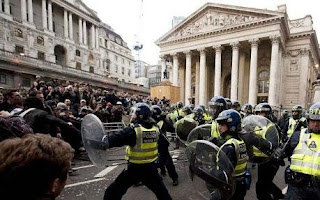 BRITAIN could face massive political and social unrest on a scale similar to Greece, a political party leader has warned.

The Guardian reported that Liberal Democrat Nick Clegg was concerned that the next government might not successfully rally the public behind plans to slash public spending and cut the state's £178bn deficit.

So far, the UK has only seen symbolic protest against the excesses of neo-liberalism, such as the anti-G20 protests in London last year (pictured), but Clegg, a self-confessed admirer of Margaret Thatcher, apparently has something on a much larger scale in mind.

The report says that in a speech to the Institute for Public Policy Research thinktank, Clegg will say a new government could be 'torn to pieces' if it tries to 'ram through' spending cuts without wider public consent.

"He will argue that the scale of the cuts needed to tackle the deficit is so great that it will be essential to engage the public in the process.

"If the structural deficit in the public finances is to be eliminated without further tax increases, at some point in the next eight years government spending will have to fall by as much as 10%.

"That means there is an enormous risk ahead. In a democracy, dramatic change cannot be imposed from above or it will fail. It has to be led by a process of political engagement," he will say.

"You only have to look at the scale of industrial unrest in Greece to see that it is impossible to reduce a public deficit quickly if you do not find a way to persuade people to go along with the process.

"If we do not find a way to take the people of Britain with us on this difficult journey of deficit reduction, we will not be able to make the journey. We will instead follow Greece down the road to economic, political and social disruption.

"If a government tries to ram through major change to public spending solely through the usual Westminster combination of machismo and threats from the whips, it will not only fail, it could find itself torn to pieces."