Tensions rise in US spring of resistance 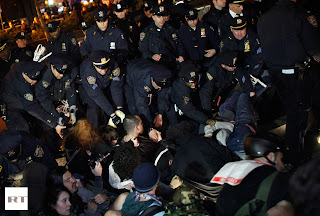 TENSION is already rising in the USA ahead of massive protests planned against the the NATO and G8 Summits  from May 15 to 22.

With dissent on the rise, authorities fear a significant outburst of anger against the neoliberal showcase events.

They have moved the G8 meeting from Chicago to Camp David in Maryland and have been cranking up the machineries of repression.

Occupy protests, no matter how peaceful, are now being routinely attacked by  police, including the Occupy Wall Street anniversary demo in New York.

Said a statement on the OWS site on March 18: "Yesterday, on the 6-month anniversary of the original Occupation of Wall Street, #OWS went back to our origins.

"After a weekend of marches on Wall Street complete with spring training exercises, a St. Patrick´s Day march, street theater, floating tents, and dancing in the intersections, Liberty Square was re-occupied by thousands of Occupy supporters.

"Unfortunately, bringing back memories of November 15th, NYPD violently evicted us from our home once again while Occupiers were hugging old friends and celebrating the coming of spring in the park.

"According to the New York Times, 'scores' were arrested, and more injured, during the attack. Police used city buses to corral mass-arrested protesters. Media were not allowed to cover the events.

"After clearing the Square, NYPD placed barricades around the area - an act specifically barred by previous legal action. At least one person was taken to the hospital on a stretcher. We have also heard reports of seizures and broken bones.

"On Livestream, peaceful protesters are seen being tackled, punched, stomped, choked, hit with batons, and thrown against cars for no reason other than sitting down to peacefully protest inequality in a public park."

Despite the plutofascist clamp-down, OWS declares: "We will not let police repression stop us!"

Keep up to date with the global insurrection - follow VM on Twitter
Posted by The Vast Minority at 02:12