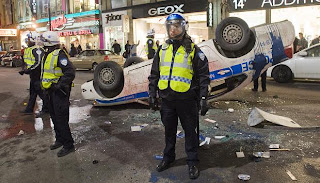 Said a statement on Anarchist News Dot Org: "We flipped over a policecar on rue Sainte-Catherine. Prole stroll.

"Everyone was like WHOO! and happy kids were dancing on the chassis, happy cuz they were right to be happy. Banks got their windows broken. Fancy stores too.

"It's the moments when the pig cruiser is flipped over and you're highfiving strangers becuz you're happy and they're happy and this is a moment to cherish. Prole stroll!

"LE 15 MARS, LA VENGEANCE. We could've done better, but we did what we did, and this was the one day when the pacifists weren't out in force and the people who get harassed by the police on a daily basis were letting loose and we got to share some knowing looks with some of the kids we haven't seen since this time last year. This was our day, our night. Prole stroll!

"Some comrades are in jail. Many people, perhaps not yet aware of the fact that we live in a surveillance society, did things that perhaps they should not have done with their faces unconcealed.

"What happens next is hard to say. Maybe the pacifists who got beaten with police batons when they sat in front of cops will have learned their lesson by now! And maybe anarchists can figure out a way to be half as badass as some of the people who were on the streets tonight.

"The city is begging the province for more help with the security crisis: student demos everyday with more to come, and now this, the biggest March 15 in years, prole stroll like we ain't seen outside of a hockey riot, what is sure to be a big embarassment to North America's crowd control experts.

"THERE IS SO MUCH MORE TO DO. Onward to March 22, onward to May Day, onward to the continental general strike and the infinite strike! Until neither the SPVM nor any other police agency nor any other institution of domination exist, our work isn't done.

"And to the kids who looted Future Shop and got some PS3s, MAD RESPECT. We GET what we can TAKE." 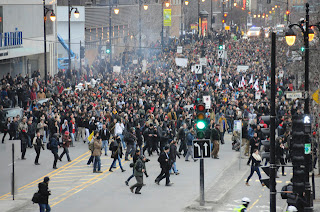 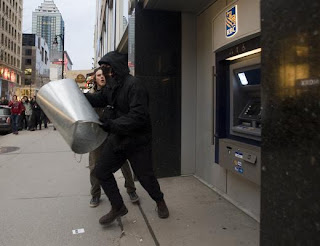