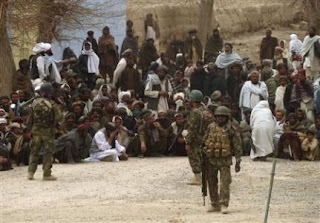 THE MURDEROUS reality of neoliberal imperialism was further exposed to the world on Sunday, with news of a massacre of innocent civilians in Afghanistan.

Western forces shot dead 16 civilians including nine children in southern Kandahar province on Sunday, in a rampage that witnesses said was carried out by American soldiers who were laughing and appeared drunk, reports Reuters.

"One Afghan father who said his children were killed in the shooting spree accused soldiers of later burning the bodies, " said the agency.


"Witnesses told Reuters they saw a group of US soldiers arrive at their village in Kandahar's Panjwayi district at around 2am, enter homes and open fire."

The US embassy in Kabul was reported as saying one American soldier had been detained over the shooting. It added that anti-US reprisals were possible following the killings, which come just weeks after US soldiers burned copies of the Koran at a NATO base, triggering widespread anti-Western protests.

Reuters later modified parts of its story to reflect the official US line that only one 'rogue' soldier was involved, while retaining the witnesses' accounts.

But AP reported on Monday morning: "Afghans are expressing growing skepticism that a shooting rampage that killed 16 civilians was carried out by a single US soldier.

"Abdul Rahum Ayubi, who is a lawmaker from Kandahar province where the tragedy occurred, said Monday it seemed impossible for one soldier to cover the ground between the houses that were attacked — over a mile (2 kilometers) — and also burn the dead bodies.

"Bismullah Afghanmal, a parliament member, said the reports he received from villagers indicate the shooting before dawn Sunday came from several directions."

As the USA's allies, Israel, continue to murder Palestinians in Gaza, the hypocrisy of the neoliberal/plutofascist claim to the global moral high ground has never looked so utterly exposed.

Keep up to date with the global insurrection - follow VM on Twitter
Posted by The Vast Minority at 08:45