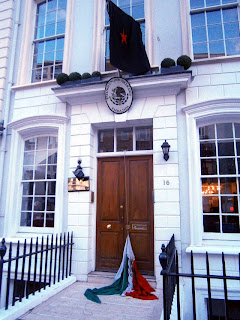 ZAPATISTA supporters staged an impressive gesture of support for the Mexican rebel movement on Saturday on a weekend of defiance against oppression.

Says a  report on Indymedia: "A solidarity demo in Embassy Quarter, London, began dramatically with the imperialist tri-colour being removed from the Mexican embassy, set on fire, and replaced with the Zapatista red star.

"Protesters then moved through London streets with music and a banner, handing out flyers raising awareness about the situation in Chiapas.

"Public engagement was good and lots of people stopped to talk and discuss the issues.

"This was part of the weekend of actions and demos worldwide.

"Solidarity to the indigenous people of Mexico!" 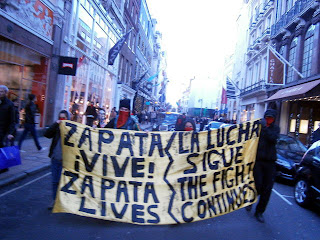 Keep up to date with the global insurrection - follow VM on Twitter.
Posted by The Vast Minority at 09:45