THOUSANDS of angry Russians have taken to the streets in Moscow and St Petersburg in protest at the corrupt Putin regime.

The ruling United Russia party won less than half the votes in this week's elections - and there are claims that even this was only achieved with the help of vote-fiddling.

Protesters in Moscow tried to march on the Central Elections Commission near the Kremlin, but were stopped by riot police and taken away in buses.

The photo below shows anarchists burning flares while protesting in the Russian capital with a banner declaring: "You were cheated!".

As one newspaper report says: "Many voters, fed up with widespread corruption, refer to United Russia as the party of swindlers and thieves and resent the huge gap between the rich and poor." 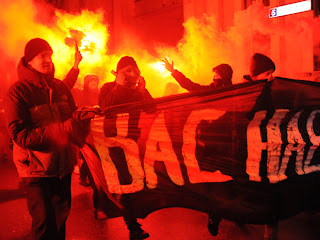