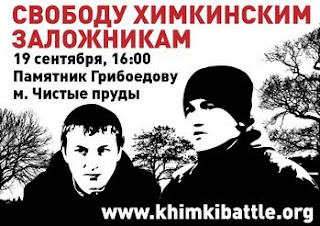 A CALL has gone out for international solidarity with the defenders of Khimki Forest in Russia.

On July 28 this year more than two hundred young antifascists and anarchists carried out a spontaneous demonstration outside the town administration building in Khimki, a suburb of Moscow.

They were protesting in defence of the Khimki Forest, under threat from plans for a toll motorway.

The demonstration, during which several windows were broken, received a great deal of public attention.

The authorities responded with a wave of repression. The day after the demonstration, two well-known social activists, Alexei Gaskarov and Maxim Solopov, were arrested.

They are now threatened with up to seven years in prison for disorderly conduct, although there is no evidence of their complicity in illegal activities.

Meanwhile, the police continue to hunt down and harass other activists, especially those involved in the antifascist movement.

Says the Campaign for the Release of the Khimki Hostages: "After the July 28 demonstration, the Russian police and secret services unleashed an unprecedented dragnet against antifascists.

"People who had even just once come to the attention of the Centre for Extremism Prevention and FSB for their involvement with the antifascist movement have been forcibly taken in for questioning.

"In several cases they have been subjected to harsh physical coercion in order to compel them to give the testimony required by investigators.

"In addition, illegal searches have been carried out in their apartments. All these actions on the part of law enforcement authorities are violations of Russian and international law.

"Frightened by the numerous and growing protests against the clear-cutting of the Khimki Forest, the authorities have finally made concessions by agreeing to review the advisability of the planned route for the toll highway. But this does not mean victory.

"Alexei Gaskarov and Maxim Solopov are still in police custody for no reason at all. They are hostages of the authorities.

"In late September, the next hearing in their case will take place. The judge will decide whether to keep them in police custody pending completion of the investigation and trial.

"Everyone who cares about the fate of these two young men must do everything in their power to see that they are set free. The Campaign for the Release of the Khimki Hostages calls on people around the world to organize days of action on September 17, 18, 19, and 20 to pressure the Russian authorities to release Alexei and Maxim.

"We ask you to hold protests outside of Russian Federation embassies, consulates, trade missions, and cultural centers, as well as at public events and concerts connected to Russia.

"We also ask you to send faxes, e-mails, and protest letters to the court, the prosecutor’s office, and the country’s political leadership. In the very near future we will inform you of addresses where you can send these protests as well as more details about the ongoing repressions in Russia. "