Blair on the run from protesters 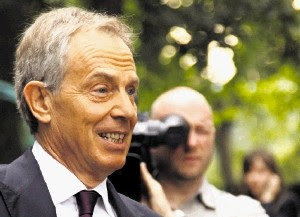 TONY Blair has cancelled a book signing in central London through fear of angry protests outside - but demonstrations continue.

His first promotional appearance in Dublin on Sunday attracted considerable opposition, with eggs and shoes thrown at him and one young woman trying to make a citizen's arrest for war crimes.

There were plans for protests in Piccadilly, London, for his second book signing event on Wednesday.

But with the event called off, it is now being suggested that he will be appearing in Bristol instead and a protest has been called for Wednesday September 8, 12 noon to 2pm, outside Waterstones Bookshop, Union Street, Broadmead, Bristol BS1 3XD

In the capital, the focus is now on the Tate Modern in Park Street, Bankside, London, where the former Prime Minister is staging a party to celebrate the launch of his autobiography.

Protesters are being urged to gather outside from 5.30pm on Wednesday September 8.

Despite the best efforts of his PR machine, it is clear that Blair remains the most widely despised figure on the British political scene.
Posted by The Vast Minority at 23:13