#June30 - time for a second revolution in Egypt! 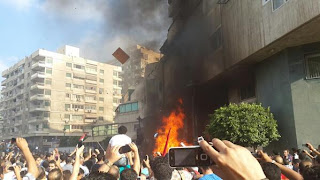 EGYPT will once again take centre stage in the dramatic global uprising against neoliberal tyranny this weekend.

Opponents of the US-backed Morsi regime will be taking to the streets on Sunday #June30 to call for a second revolution - a year after the increasingly unpopular and despotic leader came to power.

There were already chaotic scenes in Alexandria on Friday, as revolutionaries were attacked by government supporters, with reports of at least one death and many injured.

The Muslim Brotherhood in the coastal city was also said to have been set on fire (see photo) - previously such attacks have been claimed by Egypt's thriving anarchist Black Bloc movement.

Rumours were also circulating on the internet that the regime was planning to shut down Egyptian TV channels over the weekend in a desperate bid to retain power, reminiscent of the final days of the Mubarak regime.

Officials have already ordered the arrest of a talk show host and demanded a TV station be shut down for "inciting mutiny in the army and for insulting the armed forces and the police".

One live feed from Egypt on Sunday is being offered here, starting 6am Cairo time.
Posted by The Vast Minority at 11:37