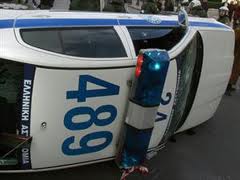 A POLICE car was overturned by angry protesters in Heraklion, Crete, on Wednesday morning as the latest general strike in Greece got underway.

A timeline on the From the Greek Streets site added: "All metro stations in the centre are closed following police orders. There is an unusually high police concentration and checks around the Victoria (Green line) station."

Live footage from Athens is being streamed at http://www.livestream.com/stopcarteltvgr

Greece remains in the front line of the global battle against plutofascism.
Posted by The Vast Minority at 03:48