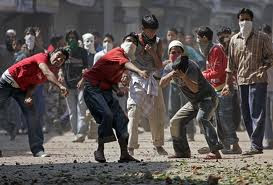 NAXALITE rebels in India are giving their moral upport to the Kashmiri resistance against the Indian state machine.

Reports The Times of India: "In a scathing criticism on the role of the central and state governments, the Naxals have claimed that the enemy was the same, be it at Dandakaranya or Kashmir.

"Through a two-page release, the rebels have extended their 'revolutionary salute' or Inquilabi salaam to the Kashmiri protesters fighting for their rights. The Maoists were critical of the use of force by the Omar Abdullah-led coalition government to crush the resistance of the people.

"The CC, along with the people's army and other revolutionary outfits, has vowed to continue supporting the valley protesters.

"The naxals dramatically equated the stone throwing youths of Kashmir to the bow-and-arrow equipped tribals of Dandakaranya. The CC 'believes that the Kashmir belongs to Kashmiris'. It has also appealed to all to support the 'just national liberation struggle of the people of Kashmir'.

"The CC has lashed out at the media for distorting Kashmir's history. Naxals have also urged citizens across the length and breadth of the country to raise their voice against the 'heartless killing of youth' by the security forces.

"They have also made an appeal to the activists and right bodies to demand the withdrawal of the forces from Kashmir. The rebels had made a similar demand several times in the Dandakaranya region in the past too."
Posted by The Vast Minority at 23:34