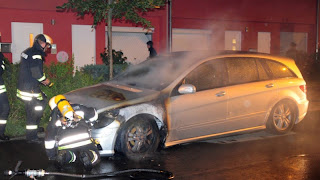 HUNDREDS of luxury cars are still being torched every year in Germany as part of a radical uprising against the capitalist system.

The latest reported incident saw an upmarket vehicle in Prenzlauer Berg set on fire on Wednesday this week, reports directactionde.ucrony.net

There is a website calling 'burning cars' (Brennende Autos) which plots arson attacks on a Google-powered map.

The featured area is centred around Berlin, but there are so many incident flags on the map that the city is obscured, apparently overwhelmed by the rampaing fires.
Posted by The Vast Minority at 23:21