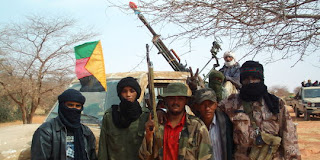 DESERT rebels have seized a number of towns in Azawad as the Western forces dislodge Islamic groups.

The original 2012 liberation of the Sahara territories by the Mouvement National de Liberation de l'Azawad was disrupted by the involvement of  'al-Qaeda' forces in the area.


In a press statement released on January 28, the MNLA  said the towns of Kidal, Tessalit, Léré, In Khalil, Anefis, Tinzawatène, Tessit and Talatayt were now under its control.

It said the local population was in danger from the return into Azawad of Malian troops, following in the footsteps of French forces.

The MNLA said the Malian army had a history of carrying out massacres of unarmed people in Azawad and since the French intervention more than 100 people had already been targeted in reprisals against Touaregs, Peuhls, Sonrai and Arabs.

It said it was assuming the responsibility of securing its towns and protecting its people against an army which specialised in crimes against the civilian population of Azawad.

Azawad formally declared its independence in April 2012. A statement from the MNLA referred to the "complete liberation of the territory of Azawad" achieved in the remarkable final uprising which began in January of that year.


It recalled that in 1960 Azawad was attached to the state of Mali, created by France - the former colonial power - without the consent of its people.
And it mentioned the massacres, extortion, humiliation, despoilment and genocide carried out against Azawad in 1963, 1990, 2006, 2010 and 2012.
It condemned the "inhuman behaviour" of Mali in using various droughts (1967, 1973, 1984, 2010….) to try and wipe out the people of Azaward at the same time as it had asked for and received generous humanitarian aid from overseas.
Azawad consists of the regions of Timbuktu, Kidal, Gao, as well as a part of Mopti region and borders Mali and Burkina Faso to the south, Mauritania to the west and northwest, Algeria to the north, and Niger to the east and southeast. It straddles a portion of the Sahara and the Sahelian zone.
Azawad is said to be an Arabic corruption of the Berber word "Azawagh", a dry river basin that covers western Niger, northeastern Mali, and southern Algeria. The name translates to "land of transhumance".