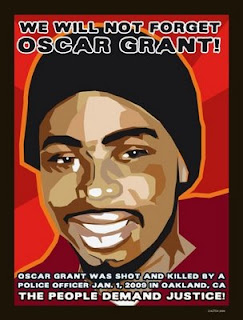 AUTHORITIES in Oakland, USA, are preparing for riots at the end of the trial of former transport policeman Johannes Mehserle who shot dead unarmed train passenger Oscar Grant.

Reports SFGate: "Police are trying to avoid any recurrence of the violence that beset the city on Jan. 7, 2009, six days after the shooting, when rioters smashed storefronts, set cars ablaze and blocked downtown streets. The riot came three days after amateur videos showing the fatal shooting were broadcast and posted on the Internet.

"Friday's police simulation, at the Port of Oakland, was part of a year's worth of preparation for how to respond to a riot, police said.

"Most of the January 2009 protesters arrested came from outside Oakland, but the case nonetheless has raised tension inside the city as well, said Officer Holly Joshi, an Oakland police spokeswoman. Mehserle is white, and the man he killed, Oscar Grant, was black.

"Mehserle shot Grant once in the back while Grant lay prone on the BART platform, where he was being detained after a fight aboard a train. 'This type of situation is very emotionally unique to the community,' Joshi said.

"Oakland firefighters, BART police, paramedics, California Highway Patrol and the city's Public Works Agency participated in Friday's training. If violence does break out during or after the trial, the city may call in police from other jurisdictions.

"In addition, police and city officials have reached out to various parts of the community, including clergy and Grant's family, Joshi said. Mayor Ron Dellums and Assistant Police Chief Howard Jordan met with Oakland businesses Friday morning, during which business owners were instructed on how to contact police and what steps to take if violence occurs.

"They're also planning to create a tip line for the public to call in reports about any Mehserle protests or violence, Thomason said.

"Self-described anarchists have already begun posting locations on leftist Web sites for where to gather on the day of the Mehserle verdict."