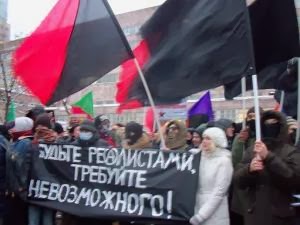 THE ROLE of Russian anarchists in the recent anti-Putin protests in Moscow has been outlined in an article on libcom.org

Despite being picked out for attention by Putin's police, they managed to form a vocal and effective block on December 24 as an estimated crowd of 120,000 protested against corruption and vote-rigging.

Almost all the speakers at a makeshift assembly were unanimous that the official 'opposition',  who consider themselves the ideologues of the protest movement, just want to get into power and do not intend to defend the interests of ordinary people.

It was unlikely that any number of peaceful meetings would lead to radical changes. People could only defend their rights by fighting against the state and capital, and building around libertarian ideas, insisted the anarchists.

The anarchists barracked 'opposition' oligarch Prokhorov when he took to the main podium, calling for  "the power of millions, not the millionaires".

After 16 hours, when some protesters began to disperse,  a column of anarchists and anti-fascists joined together with a group of feminists, LGBT activists and individual representatives of the organized left-wing organizations and moved closer to the stage.

The anarchists chanted slogans such as "Freedom, equality, anarcho-communism," "Higher, higher, black flag, the state is the chief enemy," "Fascism shall not pass!", "Our country - all of humanity!", "All politics - crooks and thieves," "Our candidate - self-government", "Down with fascism and capitalism" and "The path to freedom is revolution!".