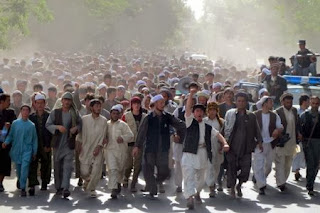 THOUSANDS of Afghans have taken to the streets in the eastern province of Ghazni to show their anger over a US-led night time raid that killed two civilians in the area, Press TV reports.

The protesters staged a rally on Wednesday and strongly condemned the civilian casualties sustained during the deadly NATO airstrike. They also chanted anti-US slogans.

Meanwhile, the Kabul-Kandahar Highway was blocked for hours by protesting local residents.

President Hamid Karzai said on December 24 that Afghanistan will not sign a strategic partnership deal with the United States until NATO night raids and house searches stop.

Karzai said that “arbitrary operations and house searches by NATO have become a serious problem between Afghanistan and NATO forces and that this has been one of the main obstacles on signing the strategic partnership deal with the United States.”

The loss of civilian lives at the hand of foreign forces has dramatically increased anti-American sentiments in Afghanistan.

Keep up to date with the global insurrection - follow VM on Twitter.
Posted by The Vast Minority at 23:14