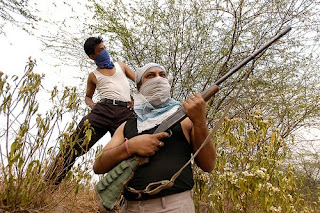 NAXALITE rebels have staged a successful ambush of Indian state forces near Rapur.

"Kanker is the headquarters of a police jungle warfare school which trains security personnel in the government's increasing efforts to tackle the Maoist insurgency.

"Chattisgarh is a stronghold of the rebels, who killed 15 police officers in an attack in the state two months ago.

"Authorities in New Delhi launched an offensive last year to tackle the worsening insurgency, but since then the Maoists have hit back with a series of bloody strikes.

"Maoist rebel groups have fought for decades in east India against state and central government rule, drawing support from tribal groups and landless farmers left behind by the country's economic expansion."