Mexico 'on brink of revolution' 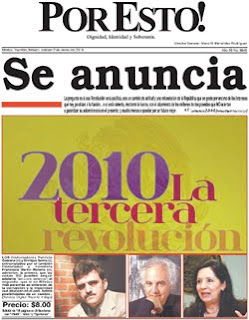 MEXICO is on the brink of its third revolution as it enters 2010, according to a widely circulated New Year message from a leading journalist.

Adds Ramón Alberto Garza: "The question is if that revolution will be peaceful, with a change of attitude and a re-founding of the Republic that would be developed beyond the interests that currently paralyze the nation…

"Or if it will be violent, through force, with the uprising of millions of destitute people who can’t manage to guarantee their survival in the present, much less bet on a brighter future."

The opinion piece by Garza, director of Reporte Indigo, was republished January 2 on the cover of the daily Por Esto!, the third most read newspaper in the Republic of Mexico, and put online by Narco News.
Posted by The Vast Minority at 05:10