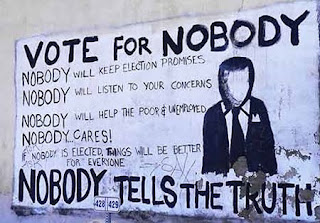 ANARCHISTS in the UK are gearing up for a big campaign against the general election to be held this year.
Said a report on A-Infos: "A packed meeting in London Sunday 24 saw Anarchist groups from London, Leeds, Halifax, Bristol, Hereford, Norwich, Cambridge, Brighton and Southampton plus individuals from Freedom Press,Liberty and Solidarity, IWW, Anarchist Federation, Antifa,Camden Anarchists,Croydon Anarchists and Whitechapel Anarchists come together to discuss a General Election Campaign.
"A unanimous YES ws given to the idea of a consistent and coherent Anarchist intervention which will begin on March 31st with a rally in Trafalgar Square to celebrate the 20th anniversary of the Poll Tax riot and ask the question ‘Which is more effective – the Ballot Box or Direct Action’.
"A whole number of other surprises and interventions are planned and in the month of the actual election campaign the ANARCHIST WAR CABINET will meet twice weekly to plan actions and then daily for the last week till May 6th.
"Freedom Bookshop will act as the hub for information coming in and out at short notice. This promises to be an exciting couple of months and a follow up meeting is scheduled for February 28th, in a world of growing centralism, alienation and marginalisation – combined with dwindling localism and community spirit – mutual aid itself is a revolutionary act.
"In fact mutual aid is probably the most powerful weapon we have, as has been said time and again, a CW conference in London is just another political meeting – do it up north and it’s a major event!"
Posted by The Vast Minority at 06:13