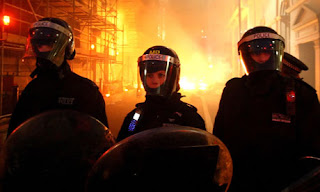 NEOLIBERALS are beginning to panic in the face of growing global resistance to their brutal and corrupt system.

The illusion of democracy and 'government by consent' is evaporating in a heated spiral of popular defiance and increased repression.

Opposition is thus becoming deeper and more radical, as the obvious impossibility of reform opens a new generation's eyes to the necessity of revolution.

One example of this process is Spain, where the state has announced a package of draconian new laws to criminalise dissent.

Jorge Fernandez Diaz, the interior minister, said "serious disturbances of public order and intent to organise violent demonstrations through means such as social networking" would carry the same penalty as involvement in a criminal organisation under the new reform.

He also said that the measures would extend authorities' powers to deal with passive resistance as contempt of court.

The measures would make it "an offence to breach authority using mass active or passive resistance against security forces and to include as a crime of assault any threatening or intimidating behaviour," he said in Congress.

In addition attempts to disrupt public services such as transportation would also be made a crime. During the recent general strike picketers blockaded bus and train stations in an attempt to bring transportation to a halt.

"New measures are needed to combat the spiral of violence practised by 'anti-system' groups using urban guerrilla warfare," the Interior Ministry clarified in a later statement.

Catalonian interior minister Felip Puig has said he wants the new laws to "make people more frightened of the system" - a clear admission of the direction the neoliberal establishment is now heading.

In Britain, where the authorities fear more rioting could erupt during the corporate beanfeast known as the Olympics, a similar version of  'democracy' is being rolled out.

Police have decided to use chemical warfare against 'rioters' - by which they also mean protesters and strikers - and are stocking up on the tools of repression.

The Guardian revealed a spate of  recent spending by police forces around the UK on plastic bullets, referred to as attenuating energy projectiles (AEPs).

It reported: "Some forces appear to have decided to considerably boost their stocks. Leicestershire constabulary spent £19,630 buying AEPs in 2010-11, doubling its spending on the previous year. So far in 2011-12 it has spent more than £10,000.

"Even a relatively small force, Avon and Somerset, which faced serious disorder in Bristol last year during the English riots and on a previous occasion amid anger over a controversial Tesco store, has spent more than £70,000 in the last three years. It also currently possesses 28 AEP launchers. That is 16 more than the larger West Midlands police, which still nevertheless spend more than £53,000 stocking up on AEPs in the last three years.

"Gloucestershire police, whose territory was the scene of one of the more surprising outbreaks of rioting last summer, decided to considerably boost its AEP stocks last year. It spent £32,060 doing so, more than double its combined spending in 2009 and 2010. Elsewhere, Greater Manchester said it had sufficient supplies last year after spending more than £76,000 in the previous two years, while Nottinghamshire has spent £74,000 in the past three years."

Meanwhile, there are signs of how the flood of revolt may now be forced to flow, if the authorities try to block it in its conventional course.

Dimitris Christoulas, the Greek pensioner who killed himself in front of the parliament (see video) and Trenton Oldfield, the anti-elitist swimmer who disrupted the upper class boat race in London are examples of  how rejection of neoliberalism will manifest itself if protests are met with chemicals and bullets.

There is a clear fork in the path ahead for humanity - one way leads to the wretched misery of plutofascism and the other to our liberation.