Tide of dissent is swelling 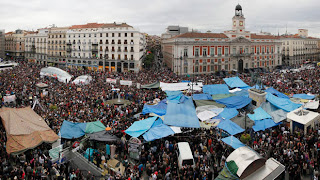 A TIDE of people power is sweeping Spain - and threatening to spread across Europe - as pro-democracy protesters defy the authorities.

While mainstream corporate media have been slow to catch up with the importance of the anti-neoliberal anti-election movement on the Iberian peninsula, word is now getting out.

The international inspiration the Spanish 'revolution' has provided can be seen at this website bringing together information from many different countries.

On the sixth day of demonstrations against unemployment in Spain, protesters in Madrid and Barcelona tell Channel 4 News they will continue to protest despite a mooted ban.

Demonstrators young and old vowed to continue protesting against unemployment - now a staggering 4.9 million and the highest in the eurozone at 21 per cent - after this weekend's local and regional elections.

Mass protests have sprung up in more than 60 cities across the country, in Madrid, Barcelona, Cordoba, Murcia, Valencia, Zaragoza, Tarragona, Salamanca, Sevilla, Malaga, Cadiz, Oviedo, Santander and Bilbao to name a few.

The pledge to continue the demonstrations came after the governement's electoral board ruled on Thursday that protests would be illegal on Saturday, the eve of elections when Spaniards will choose 8,116 city councils and 13 out of 17 regional governments.

But beleaguered Prime Minister Jose Luis Rodriguez Zapatero, whose approval rating has plummeted to lower than three out of 10, said he may not enforce the ban that could provoke clashes.

"I have a great respect for the people protesting, which they are doing in a peaceful manner, and I understand it is driven by economic crisis and young people's hopes for employment," Mr Zapatero said.

Dubbed "los indignados" (the indignant), tens of thousands of Madrilenians have turned out for six consecutive days, and many have remained overnight, in the capital's main square of Puerta del Sol. They insist that they are not demonstrating against Zapatero, his Socialist party, or indeed any political party.

They wave placards reading: "There isn't enough bread for so much chorizo" (the word "chorizo" colloquially means "thief" in Spanish), "You can camp to see Hannah Montana, but not to defend your rights," and "Sol is our Tahrir Square", referring to the ground zero of Egypt’s revolution.

Alicia, an unemployed psychologist, has remained in Sol since Sunday. She told Channel 4 News: "This is not specifically a movement against the current government. It's against the system. Against the way bankers and large businesses have been given carte blanche to do as they wish.

"I get a feeling some people think it's a movement to kick out Zapatero from power and get the People’s Party (the centre-right opposition party, led by Mariano Rajoy). It is not. It's a movement against politicians of any sign who look after their interests rather than ours, who embark on absurd electoral campaigns where they bring up irrelevant issues to try to win voters and attack their opponents, when we're more concerned about getting a job and getting back our earning power."

The protesters insist that political parties, as well as the right-wing media, have used the demonstrations as political ammunition going into the weekend's polling.

"Right-wing radio stations are saying that the protesters were trained by ETA and are ETA sympathisers, that we were being paid by the left-wing parties. They've said that we were meeting in Sol because the regional PP government is based there. This is ridiculous: Sol is the centre of Spain, where you find 'kilómetro cero'," said Alicia.

"The television channels tend to film the stereotypical young, dreadlocked protesters and not the unemployed older men in suits or the OAPs or the disenchanted university graduates, and that doesn't do the movement any favours."

In Madrid and Barcelona, demonstrators have claimed that uniformed police and plain-clothes officers have used excessive force against demonstrators at night.

Miguel, an unemployed architect living in Barcelona, told Channel 4 News that plain clothes policemen were attacking those camped out in the city's Plaza de Catalunya. "They come when many people for left for the night to get rest before returning in the morning.

"They are wearing normal clothes, often dressed like many of the protesters, with protest slogans on their t-shirts, and break the tents up, waking people up and dragging them out of the square.

"Some of the people have said they were hit with batons when they refused to move. We are worried that if Zapatero does not reverse the decision to ban protests, people will get hurt because we will not be moving."

Real Democracy Now, the online group which has organised the protests, said that police had acted "excessively" in Madrid.

A press release read: "According to information available to us… the actions of peaceful civil disobedience protests [were responded to by] the State Security Forces acting excessively. We condemn the brutal police repression and show our solidarity with those injured and the unreasonably detained for acts of peaceful resistance without any provocation, for which we demand the immediate release without charge."
Posted by The Vast Minority at 14:12